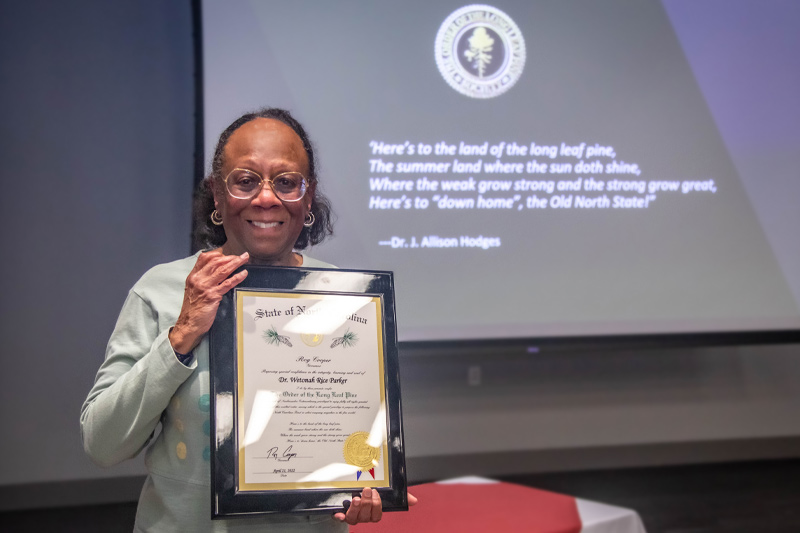 Professor Emerita Wetonah Rice Parker has received the Order of the Long Leaf Pine, the highest honor for service in the State of North Carolina. The award is granted by the Office of the Governor to individuals with 30 or more years of service to North Carolina. 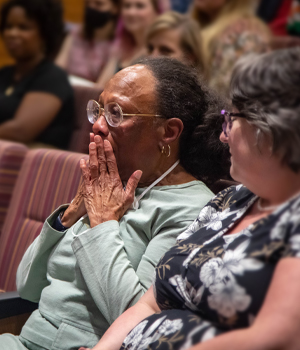 Dr. Parker was presented with the award on April 21, 2022, during a campus event hosted by Meredith’s Department of Education. The event also included Kappa Delta Pi honor society inductions and the Graduate Research Conference.

Meredith College Professor of Education Jennifer Olson, one of the people who nominated Parker for the Long Leaf Pine award, spoke about Parker’s lasting legacy through her impact on teachers and their students when presenting the honor.

“Dr. Parker’s impact ripples out from Ledford Hall on Meredith’s campus. She taught both Educational Psychology and Instructional Technology courses, both of which are foundational to our teacher education program,” Olson said. “She always worked closely with any student seeking middle school, high school, or K-12 licensure.” 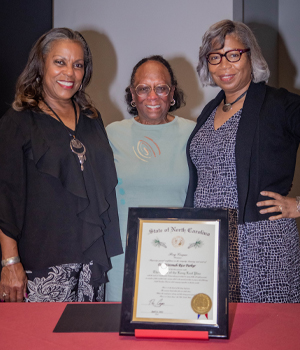 Olson noted that Parker had shaped Meredith graduates into exemplary teachers across the state.

“Dr. Parker has long been known for her exacting standards in dress, in communication, and in professionalism. Meredith’s reputation across the state can be attributed to her expectations of students. All of North Carolina benefits from her contributions, but especially the public schools and the students in those schools.”

Amy Smith King, ’99, an award-winning high school American history teacher, said the two years Parker served as an official adviser would stretch much longer. “Little did I know that she would advise me for nearly twenty years into the future,” said King. “To say that Dr. Parker molded the course of my life would be an understatement.”

King said that Parker’s legacy is her impact on teachers and their students.

“With her many years of service, Dr. Parker has touched the lives of countless teachers who now share her gift with their classrooms daily. However, she also indirectly touches the lives of the thousands of NC school children who actively participate and learn in class from a former student of hers,” King said.

Mary Hemphill-Joseph, ’05, a former teacher and principal who now serves as director of the North Carolina Department of Public Instruction’s Academic Standards Division, praised Parker as a model educator. 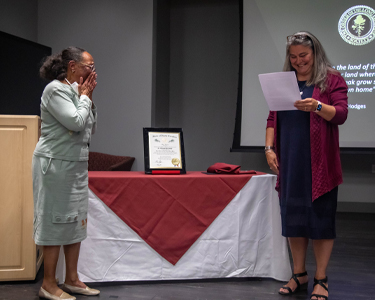 “Even as students in Dr. Parker’s academic classes, we were deeply aware that the concepts she imparted to us were not merely theories in a textbook but a lifestyle that offered a model of teaching and learning for students,” Hemphill-Joseph said. “Dr. Parker is insightful and deeply self-aware, so that reflection lends itself well as she navigated her many roles on boards, committees, and eventually as the quintessential mentor for myself and so many of my classmates long after we graduated.”

In addition to her work at Meredith College, Parker has a long list of service on state-level committees to benefit students in public schools. These committees include the Title II Quality Teacher Panel, Wake Education Partnership Steering Committee, Vice-chair of the National Board of Professional Teaching Standards – Early Adolescence/Science Standards Review Board, the State Evaluation Committee, and an Executive Board Member for the North Carolina Association of Colleges and Teacher Education.