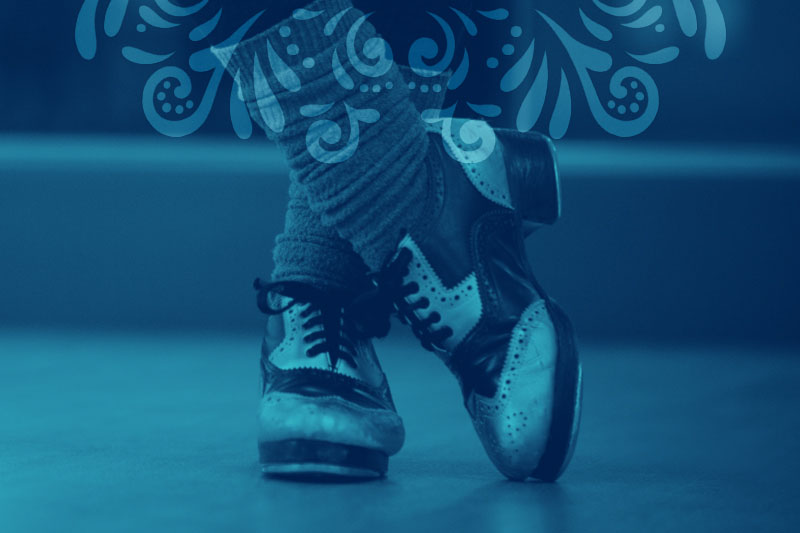 Walking into a Silver Shuffles tap class, you can’t help but smile. On this particular day, Sly and the Family Stone’s Everyday People blasts from a speaker, and suddenly it’s impossible to resist the urge to move to the music.

Add to that an ebullient instructor in gold-trimmed tap shoes, and you’ll wish you had your own pair handy. 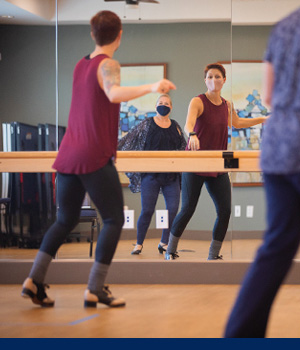 “Are you ready to shim-sham?” Brittany Mora, ’10, calls out to the class as they warm up.

“How fast do you want to go?” Mora shouts back with a grin, and they all dissolve into laughter as a new song  fills the room.

Thus begins a typical class for Mora  and her students, members of a  Durham retirement community who have discovered a new calling – as well as improved health and well-being – as dancers. “I always wanted to learn tap dance as an adult, and in Minnesota I tried to find a class with people my age, but it was just me and 6-year-old girls,” said student Sue Bradley. “When I moved here, I discovered other people interested in tap, and we started class at a nearby studio. But after a couple of months we found Brittany, and the rest is history.”

The Power of Saying Yes

“It all kind of came out of nowhere, to be completely honest,” Mora said.

After graduating from Meredith with a degree in dance education, she taught in area public schools for nearly nine years. The job became increasingly stressful, with no improvement in sight, so Mora made the difficult decision to quit and start teaching in private studios.

“But I decided that if someone came to me needing help, and I had the skills to help them, I was going to say yes,” she said. “So that’s what I did for a year, I said yes, which is how my first senior community came to me.”

A good friend and fellow Meredith dance alumna, Courtney White, ʼ08, contacted Mora with an offer she never expected: A group of retirees needed a tap instructor.

The class of four students quickly grew to eight, and the “Prime Time Tappers” ensemble was born. In February 2020, their debut performance to Come On, Let’s Go by Ritchie Valens was a hit among their audience of friends and neighbors.

Then everything screeched to a halt.

Their homeowners’ association shut down all activities in response to the COVID-19 pandemic.

“So all of a sudden, this retirement community that had promised a robust social calendar with lots of activities could offer nothing,” Mora said. “This was really tricky because most of these people had moved here from the North and didn’t have family nearby.

“And for me, as a brand new independent contractor, I suddenly didn’t have a job.”

But then she started receiving surprise checks in the mail. Her students were continuing to pay for her services even though she couldn’t teach. Stunned, she asked them why.

It wasn’t long before Mora started teaching classes outside.

The Creekside Tappers gathered in cul-de-sacs and on sidewalks in their neighborhood, dancing on handmade plywood tap boards. Audiences would pop up to watch, perched in lawn chairs.

Word spread quickly, and Mora started teaching five more classes, including jazz, low-impact cardio, and functional movement. When the weather was bad, classes would meet online, and in some cases, the dancers mastered entire routines through Zoom.

“I’ve had a lot of dance teachers in my life, and Brittany is one of the best,” said Cindy Schreiner. “Her instruction, with all of the intricacies of the steps, has helped my brain. I used to never be able to do the word jumbles in the newspaper, and now I can, because of dance.”

Mary Stella Cronberger agreed, adding, “This is more than just exercise. It is joyful movement.” 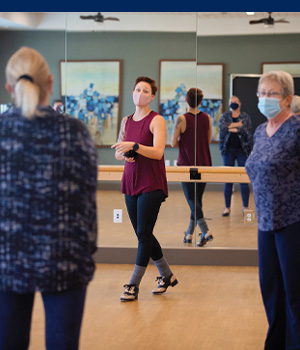 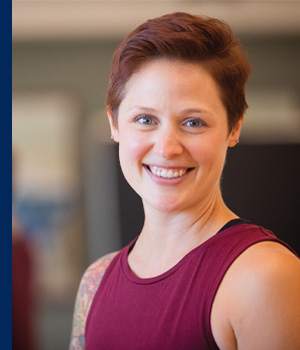 By October 2020, Mora couldn’t keep ignoring the urge to turn her teaching into a business.

“One of my students said to me, ‘You know, Brittany, I think you might be onto something here. You should think about starting a business.’ I instantly dismissed the idea. And then later it hit me – oh my gosh he’s right.”

So she filed the LLC paperwork and officially started her dance business, Silver Shuffles.

White joined her, and they expanded the business through various studio partnerships in Wake Forest, Raleigh, and Garner. They hired eight other instructors, including three Meredith alumnae: dance majors Nikki Giovanni Turner, ’08, and Megan Beachem, ʼ19, and exercise and sports science major Maggie Best, ʼ21.

“Courtney is amazing, and she never stopped doing all the other things that she did before jumping in to help me,” Mora said. “She recently stepped away from Silver Shuffles to fully return to her life and other commitments. I’ll always be grateful to her.”

At a time when well-established small businesses struggled to stay afloat, Silver Shuffles thrived, providing much-needed community during the isolating early months of the pandemic.

“We very much helped each other,” Mora said.

Her students have given a variety of outdoor performances in their neighborhood, ranging from a lively In the Mood routine to a spooky Thriller number.

“I really didn’t think I could perform in front of others,” said Jan Jarrett. “But Brittany and the girls in the class really gave me the encouragement I needed to get out there. It was a wonderful experience. I never thought I would be able to do that.” 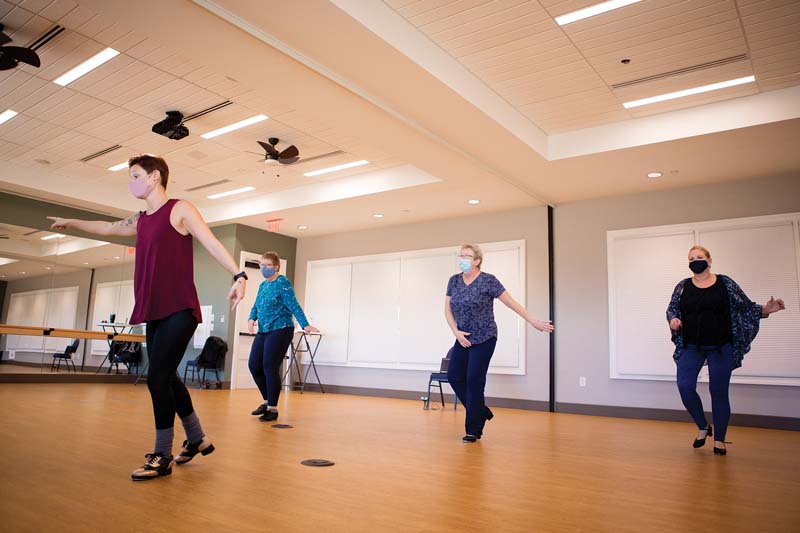 Starting with ballet at the age of 3, Mora excelled throughout her childhood in different types of dance. In high school, she was also a star athlete competing in three varsity sports.

When it came time to think about college, the prospect of a track and field scholarship was tempting, Mora said, but she felt pulled toward dance. She chose Meredith for its strong programs in the arts, not knowing exactly what she would study. Her ‘aha moment’ came at the beginning of her second year, when she discovered Meredith’s dance education major.

“I look at myself now, and I feel like a completely different person than when I started at Meredith,” she said. “I didn’t fully realize at the time how rigorous Meredith’s education program is compared to others.

“When I started my first job after graduating, I felt so much more prepared than all of the other new teachers I was surrounded by, in every way. I was equipped not only to teach steps and movement, but also the history and culture of dance. I received an incredibly well-rounded education.” 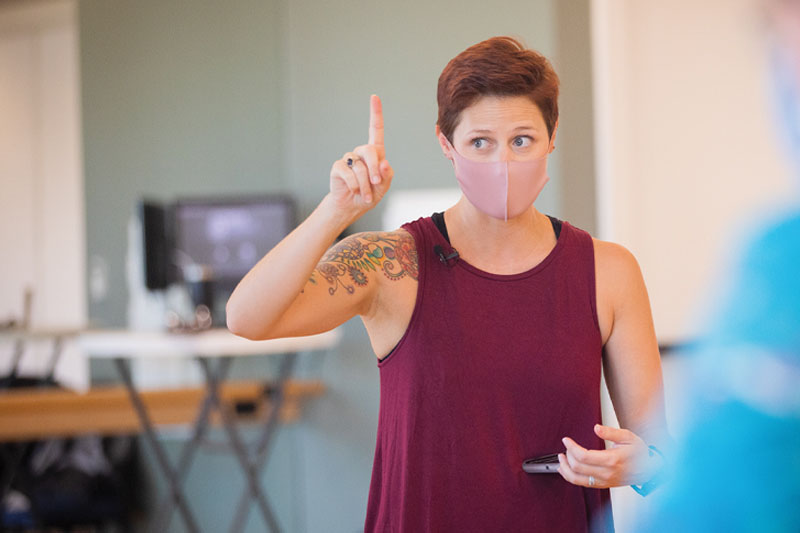 As vaccines became available and COVID-19 restrictions began to lift, Silver Shuffles class participation began to fluctuate. But despite the roller-coaster experience of getting a small business off the ground during a pandemic, growth has been steady. Mora says she remains hopeful the business will continue to flourish.

“The whole reason I started teaching dance in public school was because I felt like it was an underserved population. So it was really hard for me to step away from the children. I felt like I didn’t have a purpose.

“But this experience with Silver Shuffles has helped me realize I’ve had a purpose all along. I’m still serving an underserved population. It just looks different.”

Her favorite part of the job? The relationships, hands-down.

“Being a part of the excitement that my students feel when they perform, I can’t help but get swept up in that,” Mora said. “It’s easy to see they are having the time of their lives, and that is everything to me.” 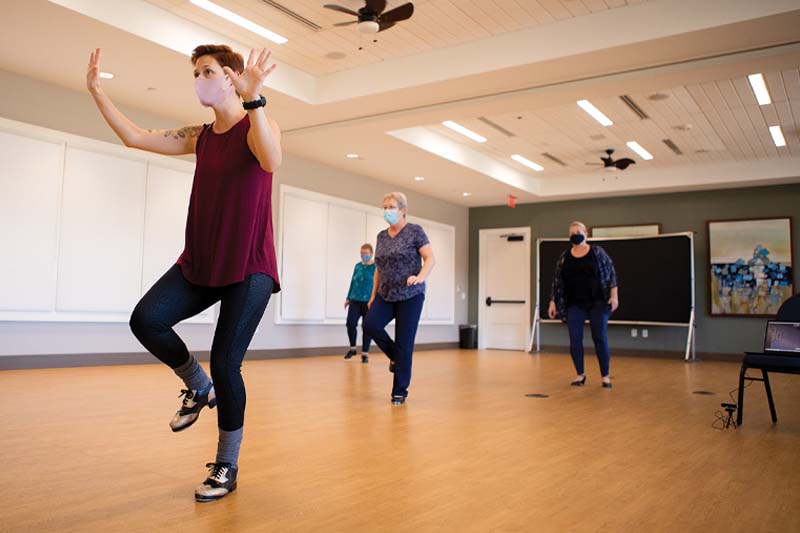