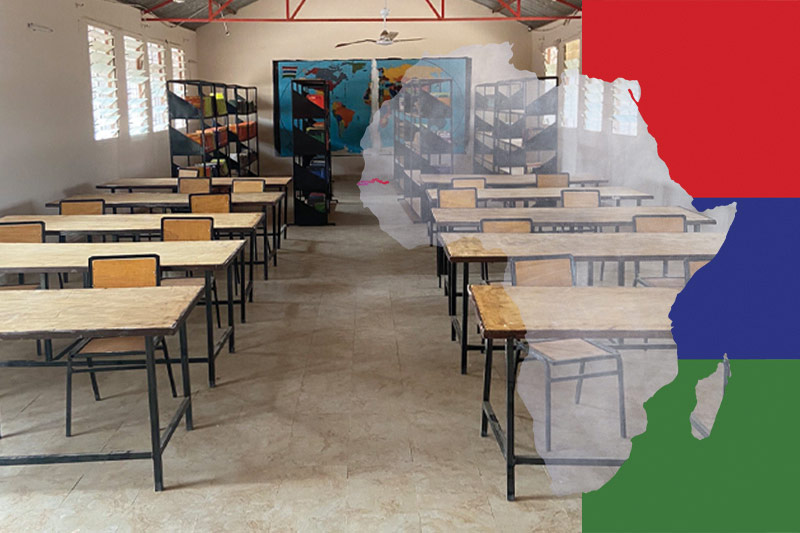 Suwai Sonko, ’04, walks toward the newly renovated library with the principal of the Essau School, located in the North Banks Division of The Gambia. As they peek through the window, the two see a room packed with children excitedly exploring the shelves filled with new books. 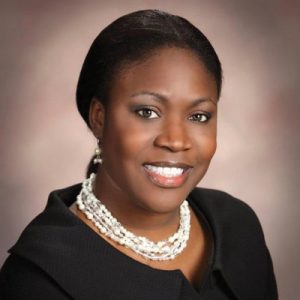 Impactful projects and partnerships with the community like this inspire the Jileng Kunda Project (JKP). Founded in 2018, the nonprofit works to improve people’s lives in underdeveloped communities in The Gambia.

“The Jileng Kunda Project is inspired by love and driven by compassion,” Sonko said. “And I say that because it’s inspired by the love of a country and having compassion for the less fortunate. And that’s where our values are.”

In 1965, The Gambia gained independence after 200 years of British colonial rule. Despite the progress the country has made since gaining independence, according to the World Food Program, 48% of the country’s population lives in poverty and ranks 174 out of 189 countries in the 2019 Human Development Index.

Sonko grew up in The Gambia in a middle-class family. When she was 16, her father wanted to give her an opportunity for a better education because of the lack of higher education in The Gambia. She left in 1998 and returned in 2012. This visit ended up being the catalyst for the creation of JKP.

“I was a very sheltered child. I spent my entire flight full-on crying because I could not believe the amount of poverty,” she said. “I’m living in the United States, where running water, electricity, all these things are basic. And over there, they are luxuries. People go without, and my heart was broken. I kept saying, ‘I have to do something.’”

Her love for her country prompted Sonko to reach out to her longtime friend and fellow Meredith alumna, Ejiro Ubiedi-Morrow, ’04, for help.

Setting a Vision Into Motion 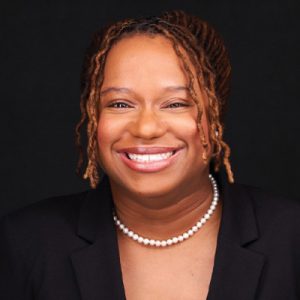 Sonko and Ubiedi-Morrow met through a mutual friend during their second year of college. After graduating, the two went their separate ways but kept in touch.

“Our friendship and sisterhood are really strong. Ejiro and I could have gone a whole year and not talked to each other, but when we get on the phone, it’s like no time has passed,” Sonko said. “We’ve made a connection, and it’s lifelong.”

Since 2006, Ubiedi-Morrow has worked in nonprofits, primarily as a grant writer, but still volunteering and fundraising as well. In 2018, Sonko came to Ubiedi-Morrow wanting help filing for a 501(c)(3) status, which is the portion of the US Internal Revenue Code that allows for federal tax exemption of nonprofit organizations.

“I had deep roots in understanding how nonprofits worked, so I was happy to help. As I said, my major focus was grant writing, but since then, I’d come to understand how strategic planning works and gained a global understanding of nonprofits,” Ubiedi-Morrow said.

From there, the two brainstormed and got everything they needed together. The first step for them was to identify what the nonprofit should stand for. Sonko explained that she wanted to find a way to leave an impact on a local, communal level.

“There’s a lot of politics and red tape involved, and the money doesn’t always make it to the people who need it,” Sonko said. “I remember saying that I’m not doing this. I’m going to the community. I’m going to talk to the principal. I’m going to go to the locals and say, ‘I want to help your community. What is your greatest need?’” 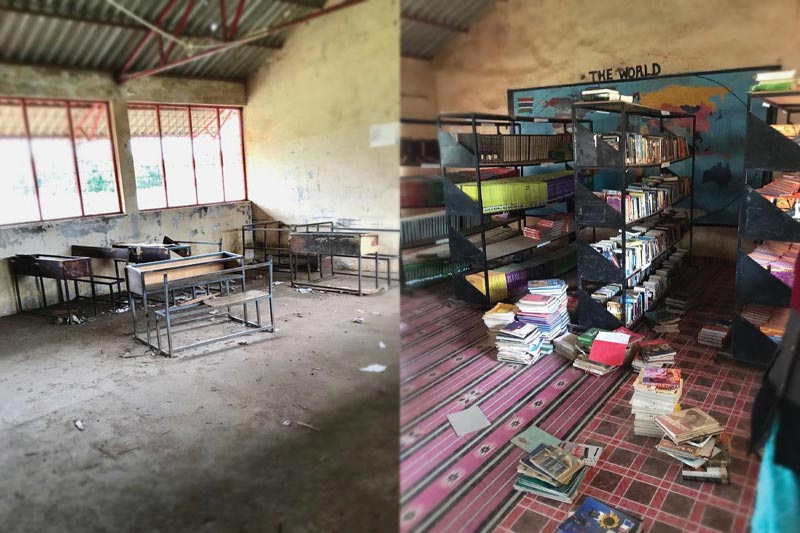 After deciding what JKP would stand for, with encouragement from Ubiedi-Morrow, Sonko began researching what other nonprofit organizations were doing. Once she had completed her research homework, Sonko started to go through the official filing process. This included registering with the state of North Carolina, getting the Employer Identification Number (EIN) to identify the organization, and going to the federal government to get the tax exemption status.

Sonko started talking with different people about who would be on the board of directors, and once again, Ubiedi-Morrow was with her every step of the way.

“She encouraged me to go through a program that helped nonprofit executive directors learn how to set up the nonprofit, what other things you need to do, and just train you through that process. I think it was about eight weeks, and it was a big commitment of time, but I knew it was important for me to do,” Sonko said.

After completing this class, Sonko worked to gain funding for JKP, so she built a website, created social media accounts, and pulled together an executive board to begin community outreach.

Changing the Lives of a Community

JKP is broken into three programs: school restoration, healthy communities, and sustainable small businesses. Although JKP was officially established in 2018, it wasn’t until 2020 that they were able to begin meaningful work.

The first project occurred during the COVID-19 pandemic, when they collected personal protective equipment (PPE) supplies for communities in The Gambia.

“There was a lot of COVID aid that was sent to the country, but it was always centered in the urban areas. So, I realized the rural communities don’t have it, so we decided to do a supply drive.”

With support from “The Angel Tribe,” donors who give monthly to JKP, they were able to provide about a year’s worth of PPE supplies to the Fass Njaga Choi Community Clinic, located in the North Bank Division of The Gambia, south of the Senegal border.

One of Sonko’s proudest accomplishments was the Essau School library renovation, completed in March 2022. JKP hopes to renovate the entire school eventually, but because of the high cost of doing so, they decided to break the project down into sections. 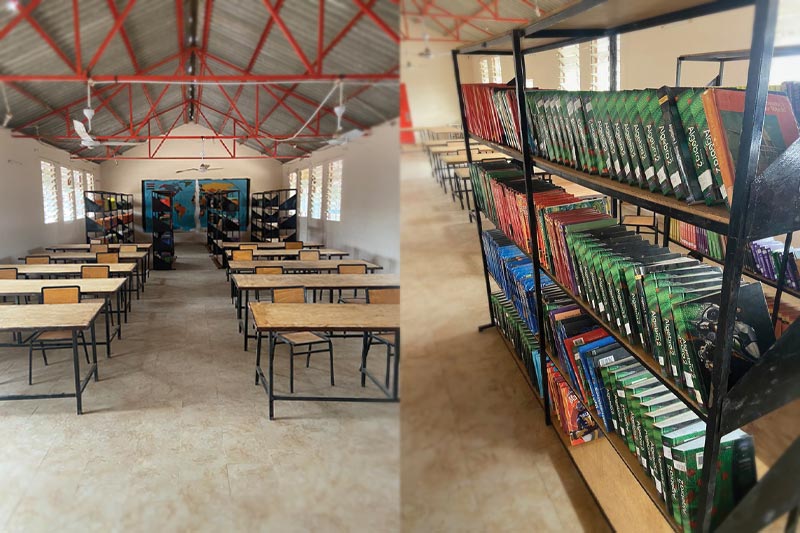 “It was probably going to cost us $50,000, but we knew getting that kind of money as a small nonprofit was going to be a lot, and it was going to take time. So we decided to start with the library,” Sonko said.

Before the renovation, the library’s floors were exposed ground, there wasn’t enough seating for students, and the seating they did have was broken. The bookshelves were also broken, and there weren’t enough relevant materials.

JKP worked with local contractors on the library, and gave the space a fresh coat of paint, new and up-cycled tables and chairs, refurbished and new shelving, and new books and supplies.

“When I got to The Gambia in March of this year, and I saw the finished library, it brought me to tears,” she said. “It was packed, and it just validated the fact that the work we’re doing is important because they immediately were able to make use of it. That’s my favorite memory. Just seeing that transformation and seeing that it’s being used and appreciated.”

JKP plans on continuing its renovation of the Essau School. Their next project will be focused on restoring the science lab. The structure of the lab is collapsing, there is no lab gear or safety supplies, and they need new educational materials and textbooks.

They hope to eventually construct and renovate the Essau School classrooms, staff rooms, libraries, and school grounds, as well as hygienic toilets and clean drinking water. They will also provide educational materials, textbooks, resources, and train teachers to give them the professional support they need to inspire their students.

“What I want people to know about the Jileng Kunda Project is that it’s a family foundation. It’s a foundation that works at the communal level. We’re working with the local people who are willing to help themselves in that community. And it’s founded by people who came from humble beginnings.”

To learn more about JKP, visit their website at jilengkundaproject.org.