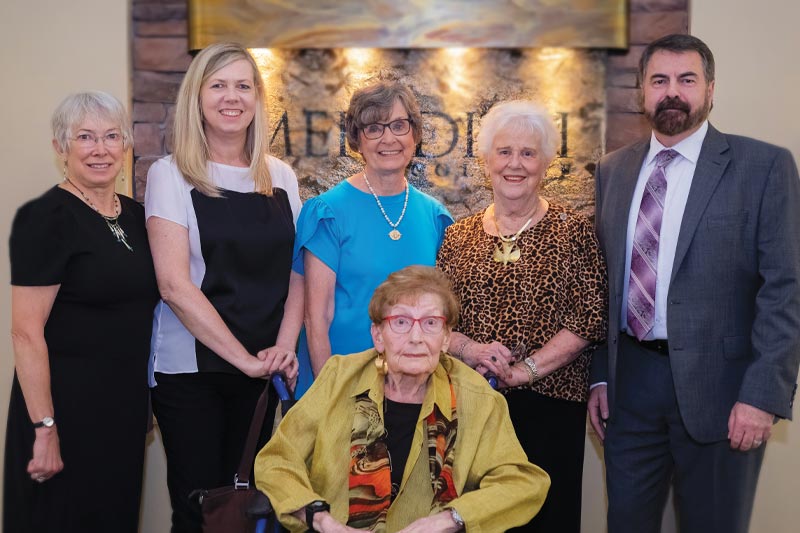 Reading Time: 3 minutesM eredith College celebrated 50 years of its adult education program, Wings, with an anniversary event on September 15, 2022. Alumnae, past directors, current students, faculty, and staff attended the event in Jones Auditorium that reflected on the program’s history and future.

The program was established in 1972 as the Re-entry Program, and was designed to help women ages 23 and older continue their education and graduate with a bachelor’s degree.

Sandra Close, who enrolled at Meredith at the age of 40 and later became program director, welcomed attendees before introducing President Jo Allen.

“Today is a very important day for Meredith College and especially for the Wings program. It was called Re-entry, then 23+, and finally Wings. We may have struggled with the name but never struggled with the mission,” said Allen.

“The hallmark of the Wings program is caring. Each of these leaders listened, questioned, and encouraged students to dig deep and find strength and talent to help them succeed at Meredith,” said Allen.

The hallmark of the Wings program is caring. Each of these leaders listened, questioned, and encouraged students to dig deep and find strength and talent to help them succeed at Meredith.”
– President Jo Allen, ’80

Allen mentioned that women came to class during their lunch break, after their children went to school, and after work.

The adult education program was unavailable for a few years but students were still admitted through the Admissions Office. After Allen became president she made a commitment to restart the program. In 2015, Tom Manning was hired as the new director. After much discussion, the program took the new name of Wings. In the last 50 years, well over 2,000 students have graduated from Meredith through the adult education program.

Jean Jackson, vice president of college programs, celebrated students from each decade with a music selection and various videos that highlighted an alumna of the decade. Alumnae shared what the program meant to them and their experience on campus.

“I was born into learning. It changed my life for good. It has been one of the best experiences I have had. I will never forget it,” said Lili Ruth Lawson Jones, ’82. Jones said Anne Dahle and the professors were a great influence on her and she appreciated the chance they took on her to attend college for the first time.

Carroll Hill Cato, ’94, was a religion major who started Meredith at 44 and wanted to be a hospital chaplain. “I had a lot of fun here. I grew up here. I remember coming to the campus the first time and stood in a line with 17- and 18-year-olds. I made an appointment with Close and Dahle, took one class at a time, then took two classes, and then went full time. The professors’ doors were always open. I loved that about Meredith.”

Pinaky Patel, ’19, was a computer science major. “Tom Manning’s support and energy and the fact that he was always there for you no matter what and without any hesitation any time, any day made me want to stay at Meredith College. The staff and professors were amazing.”

Vaune Blalock, ’20, majored in dance studies at the age of 55 and was a full-time student. “The best thing about Meredith College for me was the experience. It was a great experience of acceptance at my age. Everyone made me feel so welcome. Now I have a legacy of education for my entire family.”

Valerie Rodriguez Jusino, ’23, current Wings Organization president, was 28 when she enrolled at Meredith in 2021. She spoke about her path to complete her second bachelor’s degree in business administration at Meredith.

“I have learned it is never too late. It was one of the best decisions of my life. Meredith College has helped me build confidence and keep my dreams alive,” she said.

Tom Manning, current director of Wings, gave his vision for Wings and praised Dahle for endowing a fund to bridge the gap in tuition for Wings students

“By endowing the Anne C. Dahle Founder’s Fund, the gap fund between financial aid and awards and tuition, she provided the foundation for Wings growth for future generations,” said Manning. “You have changed so many lives in this room and beyond.”

A tea and a social were also held to provide an opportunity for Wings alumnae to gather and remember their time at Meredith.