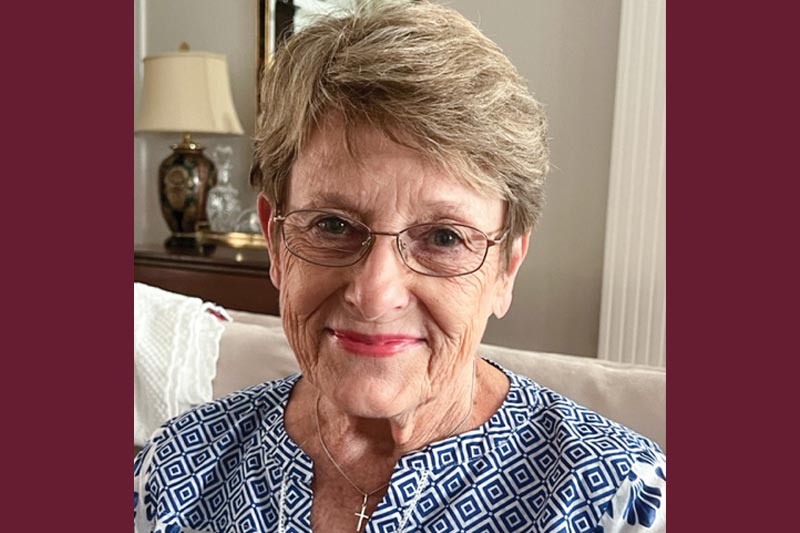 It was a normal Monday morning in May 2021. Katherine (Kappie) Griggs, ’63, was meeting with The Old Cheraws Chapter, Daughters of the American Revolution, at The Wine Factory in Cheraw, S.C., when suddenly, a large crowd began entering the room, and Griggs recognized Mayor Andy Ingram, several Town Council representatives, and Representative Richie Yow of the S.C. Legislature.

“I turned to the friend sitting next to me and asked, “What is going on?” and she responded, “You are about to find out!” said Griggs.

The large crowd was there for Griggs to surprise and present her with South Carolina’s Order of the Silver Crescent, which honors those who have contributed greatly to the public.

“In all of my life, I have never been so surprised!” she said.

Griggs has spent most of her life actively involved in her community and leaving a positive impact on the lives of others through volunteering. In fact, two weeks after Griggs’ graduation, she flew to Milwaukee, Wis., to train as a Peace Corps volunteer for three months. She was one of Meredith’s first Peace Corps volunteers.

“I was thrilled to be selected to volunteer in Visakhapatnam, AP, India, to teach English and math to Indian high school students in 9th through 11th classes for two years. I fell in love with South India and the people I met there,” said Griggs.

After serving as a volunteer in India, Griggs returned to the U.S. and spent three years on the Training Division of the Peace Corps Washington staff. She was married in 1969 to William Griggs, and the two moved to Cheraw, S.C., to raise their children, and she worked as a bookkeeper in his law firm.

“After Willie died in 2001, I was elected to the Cheraw School Advisory Board and chaired that organization for 15 years. I taught Sunday School for more years than I can count and served on the Cheraw Parenting Commission. In 1999 I was recognized during the Meredith College Centennial Celebration as one of 100 Meredith alumnae who had made significant contributions in volunteer service and family issues,” she said.

Griggs has been a part of many boards within Cheraw, including the board secretary of St. David’s Cemetery Association, member and former Board Chair of Hospice of Chesterfield County Foundation, Chair of Cheraw, Inc., a member of the Chesterfield County Economic Development Board, and former Chair of the Greater Cheraw Chamber of Commerce.

Her proudest achievement has been being a founder and current board member of the Mercy in Me Free Medical Clinic in Cheraw.

“I have served as office manager and volunteer coordinator and volunteered there at least three days of every week from September of 2009 through March 15, 2020,” said Griggs. “The Clinic serves the uninsured in Chesterfield County, raising funds for medicines and tests through local donors without accepting Government funding.”

Griggs has moved to Winston-Salem, N.C., to be closer to her family. Still, the reverberations of her impact on her community in Cheraw will be felt for the next several generations.