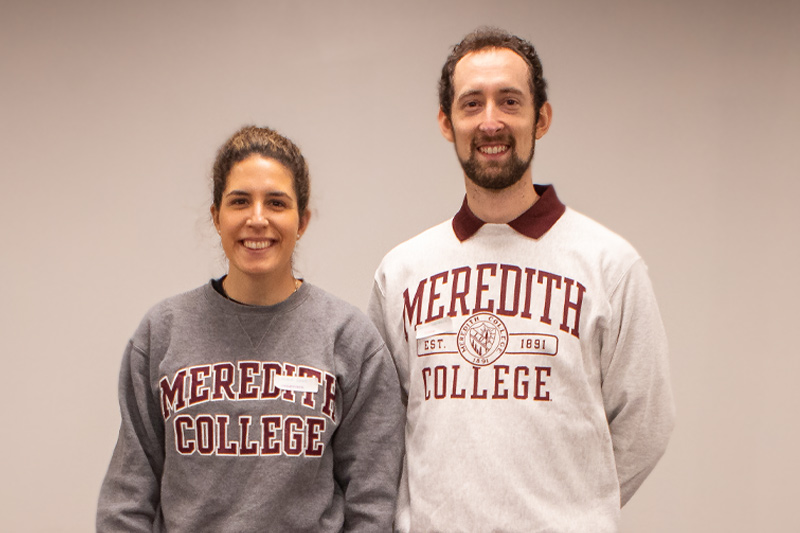 Meredith College held its first Hunger Week from March 28-April 1, 2022, as part of a national effort to bring awareness to hunger and homelessness. The week is part of the Angels are Aware Campaign, designed to raise awareness about food insecurity both on campus and in the community as well as connect students with resources available to help alleviate hunger and food insecurity. 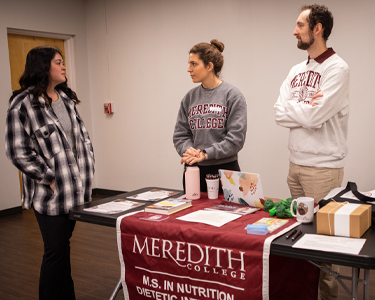 ​Meredith students in the Master of Science in Nutrition program were instrumental in organizing the series of events.

A Basic Needs Fair in Cate Center kicked off the week, connecting students with Meredith resources such as the Daisy Trade food pantry and the Counseling Center, external resources including the Inter-Faith Food Shuttle, and more.

Kylee McCombs, MS, RD, LDN, completed her dietetic internship at Meredith and now works for the Inter-Faith Food Shuttle as the director of community health and nutrition.

“We appreciated the invitation to come out and discuss our food resources,” said McCombs. “Inter-Faith has a robust internship program and a number of volunteers come from Meredith, too. It’s nice to see communities helping communities.”

Also present was M.S. in Nutrition student Laura Sans Duran, ’23, who helped organize Hunger Week. She will be moving to Las Vegas in the fall with her husband, who serves in the military. After completing her dietetic internship, she plans to become a dietitian for the military or establish a private practice.

She was inspired to work on Hunger Week because she’s concerned about her fellow students who may be struggling.

“Our goal is to raise awareness about food insecurity on campus,” she said.

Other events included a Share Your Plate workshop in Cate, an outdoor film festival featuring student and professional short films and a food truck, and a Hunger Banquet.

Hunger Banquet attendees participated in a simulation in which each person was randomly assigned to a socioeconomic status that led to them having significantly different meals and eating experiences.

During the meal, Hood shared food insecurity data broken down by country, state, and college or university.

“Food insecurity impacts students’ academics, their sleep, and their stress levels,” said Hood. “Awareness is key – faculty and staff need to know how to support students.”

Associate Professor of Sociology and Vann Professor of Racial Justice at Davidson College Joseph Ewoodzie, Jr., was the keynote speaker at the Hunger Banquet. Ewoodzie shared stories from conducting research for his recently published book, Getting Something to Eat in Jackson: Race, Class, and Food in The American South.