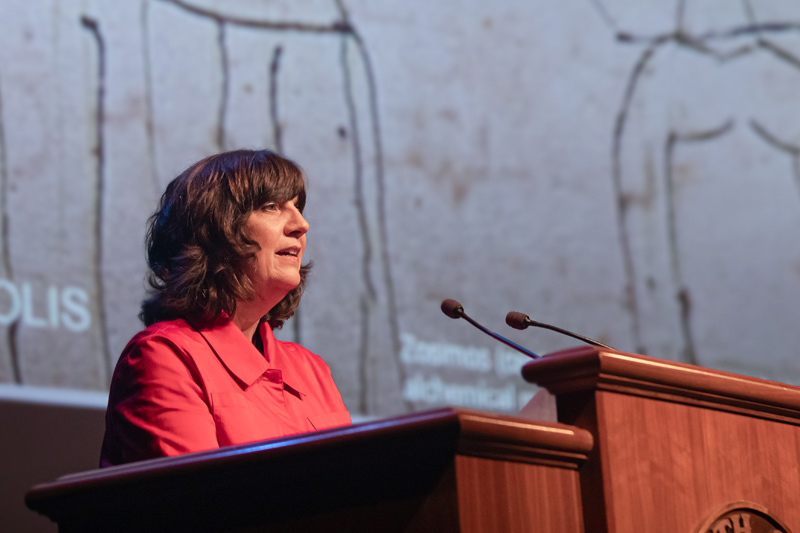 In her lecture, Grimes shared a richer and more complex picture of alchemy, which is rooted in the artisanal traditions of ancient Egyptian temples where gold-making was associated with god-making.

Grimes shared how she first became interested in the topic of alchemy, calling this “an intellectual love story.”

“My field is religious studies, which we can narrow down further to my area of specialization, which is religion and philosophy in the Greco-Roman world,” Grimes said. “But that’s still too broad. For the past 20 years, my research has focused on one particular person: a 3rd-century alchemist from Egypt named Zosimos of Panopolis.”

Her interest has its roots in a course on alchemy she took while earning her master’s degree.

“That’s when I first encountered Zosimos. He is an important figure in the history of alchemy because he’s the earliest alchemist we know of who had a religious approach to his work. He’s considered the father of religious alchemy,” Grimes said.

In her lecture, Grimes discussed alchemy, which is an early form of chemistry, in historical, religious, and cultural contexts.

“Alchemy was and still is practiced in many parts of the world, though with different aims. India and China focus more on medicinal, the elixir of immortality. Arabic and European alchemy, or the so-called Western traditions, focused on the transmutation of base metals into gold,” Grimes explained. “But even that is an oversimplification. There are many different alchemies, and the definition depends on cultural and historical context – even there, you will find a great variety.”

Grimes said she was drawn more to the overall worldview shown in alchemy rather than the chemistry. “Alchemy exists in this mix of science, magic, and religion,” she said. 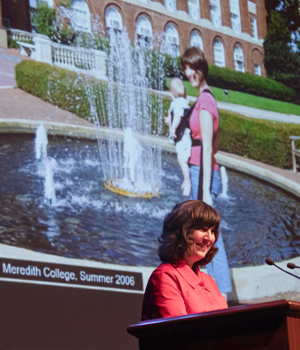 Grimes earned her doctorate in religious studies at Syracuse University in 2006 and began teaching at Meredith College the same year. For several years she has served as the chair of the Religious and Ethical Studies Department. She has also won awards at Meredith College for her teaching and her research. While Grimes teaches a wide range of courses – from biblical studies and world religions to environmental ethics – her primary area of expertise is religion and philosophy in the Greco-Roman world. She is especially interested in ancient views of nature and the cosmos, and connections between science, magic, and religion.

In addition to the presentation in Jones Auditorium, the lecture was live-streamed.

The Faculty Distinguished Lecture, first presented in 1964, was designed to represent a significant achievement of research by a Meredith faculty member. Grimes was selected for this honor before the start of the COVID-19 pandemic.